User Consent and Acknowledgement
By using this site for file transfer (the “Site”), you (“User”) acknowledge and agree to the following:
Thank you! Your submission has been received!
Oops! Something went wrong while submitting the form.
<< Return to 2xwealth.ingalls.net
ARCHIVE
February 8, 2018
Volatile Markets
Worst Day Ever for the Dow Jones Industrial Average!
Lisa James & Lori Zager
News organizations like dramatic headlines, but they increase investor nervousness if not placed in a proper context.
While the 1175 point decline on Monday is the largest POINT drop in the Dow, it is only the 99th largest decline in percentage terms (-4.6%). That’s not nearly as attention grabbing, is it? In total, the recent market decline has simply brought us back to early December 2017 levels.

We’ve had two years of steadily improving stock markets with very little volatility. In fact, we haven’t had a correction since the last one in the summer of 2015 through February 2016. If we look at history, these periods of stability are most often followed by more dramatic market movements. Interestingly, recent history shows that spikes in volatility tend to lead to above average returns for the subsequent 2 to 3 months.

Check out the charts below on the VIX, the CBOE volatility index. 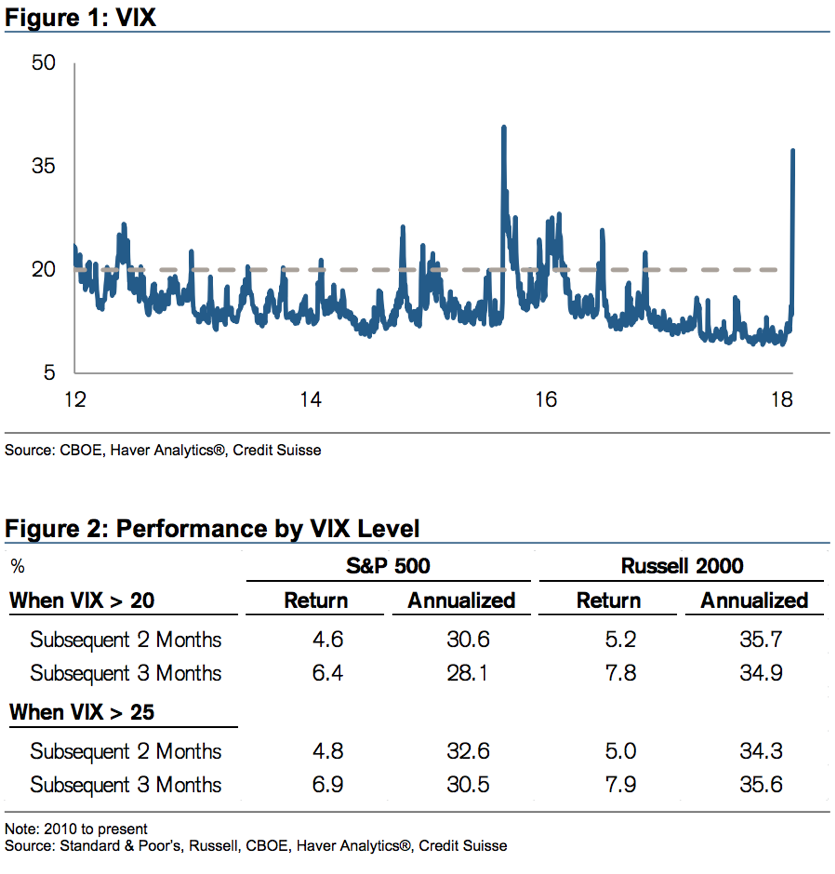 So, what’s behind this recent market move? Although we can point to several fundamental reasons for the market selloff, the ferociousness of the move might best be explained by technical factors including trading in the XIV (an instrument created to bet against volatility) and the increased volume in passive trading.

Low levels of volatility have persisted for the last year, and a number of traders used the XIV to bet that volatility would remain tame. The calmer the markets, the more profitable the trade.  However, when volatility spiked in the last couple of sessions (for the fundamental reasons we cite below), those traders tried to cut their losses, causing downward pressure on the U.S. stock market. As a result, on Tuesday, Credit Suisse announced that the last day of trading for the XIV will be February 20th. Good riddance.

Trading in passive funds was another contributing technical factor to the market selloff. According to the National Bureau of Economic Research (NBER Working Paper No. 20071) “ETF ownership of stocks leads to higher volatility and turnover.” As of 3:30 PM Monday, ETF trading equaled 40% of stock market value, well above the typical 25%, and therefore exacerbated Monday’s volatility.

On the fundamental side, there are a number of possible triggers for the market downturn. First, Treasury bond yields jumped last week due to concerns about inflation after a government report showed unexpected increases in U.S. wages. Part of the past increase in stock prices has been due to very low interest rates. Now that rates are rising, the expected value of future corporate earnings is reduced. Second, there are concerns about trade tensions with China. Third, once the market went down, investors who borrowed money to buy stocks started selling some of their positions and reduced their borrowings. Lastly, investors with stop loss orders had them executed, increasing the volume of sales. Just as 'animal spirits' lifted the market, anxiety and selling can feed on itself. There is always a psychological component to the market.

So, what's a prudent investor to do?  In order to benefit from the long-term performance of the stock market, we have to understand and live through these periods of volatility. It's an excellent time to reassess your risk tolerance and make sure your portfolio asset allocation is right for you.

The content on this page are for informational purposes, and is not intended to be a formal research report, a general guide to investing, or as a source of any specific investment recommendations and makes no implied or express recommendations concerning the manner in which any accounts should be handled. Any opinions expressed in this material are only current opinions and while the information contained is believed to be reliable there is no representation that it is accurate or complete and it should not be relied upon as such.  Investing involves risk, including loss of principal, and no assurance can be given that a specific investment objective will be achieved.

BACK TO BLOG POSTS >>