User Consent and Acknowledgement
By using this site for file transfer (the “Site”), you (“User”) acknowledge and agree to the following:
Thank you! Your submission has been received!
Oops! Something went wrong while submitting the form.
<< Return to 2xwealth.ingalls.net
MARKET INSIGHTS
May 30, 2019
Why do We Care About the Shape of the Yield Curve?
What Does it Tell Us?
We never really know where markets and the economy are headed, but market participants constantly look for clues.
By lisa James
Since 1966, a prolonged inverted yield curve between 3-month Treasury Bills and 10-year Treasury notes has predicted a recession. So, it’s a pretty good economic indicator! This month, the 3-month/10-year portion of the curve inverted for the second time this year, prompting media reports about the elevated likelihood of a recession in the next 6 to 18 months.
What’s the concept behind the yield curve, and how does it normally look?
In order to understand the yield curve, consider the following example. Let’s say you are about to make two similar loans. The term of the first loan is three months and second one is ten years. Would you charge the same interest rate for both loans? Probably not! There is a lot less uncertainty associated with a three-month loan than a ten-year loan, so you would likely charge a lower interest rate for the three-month loan. Your expectations about inflation and the likelihood of the loan being paid back would influence how much more you would charge for the ten-year loan.

‍Similarly, in a normal economic environment, the interest rate on a U.S. Treasury bill maturing in three months is lower than on a US Treasury note maturing in ten years. Since the U.S. government issues many different maturities of bills, notes and bonds from one month to thirty years, we can create a graph using all these rates called the yield curve. Because US Treasury debt is considered the highest level of credit quality, the treasury yield curve is considered a fairly pure indication of US inflation and deflation risk. See the drawing below of a normal yield curve. 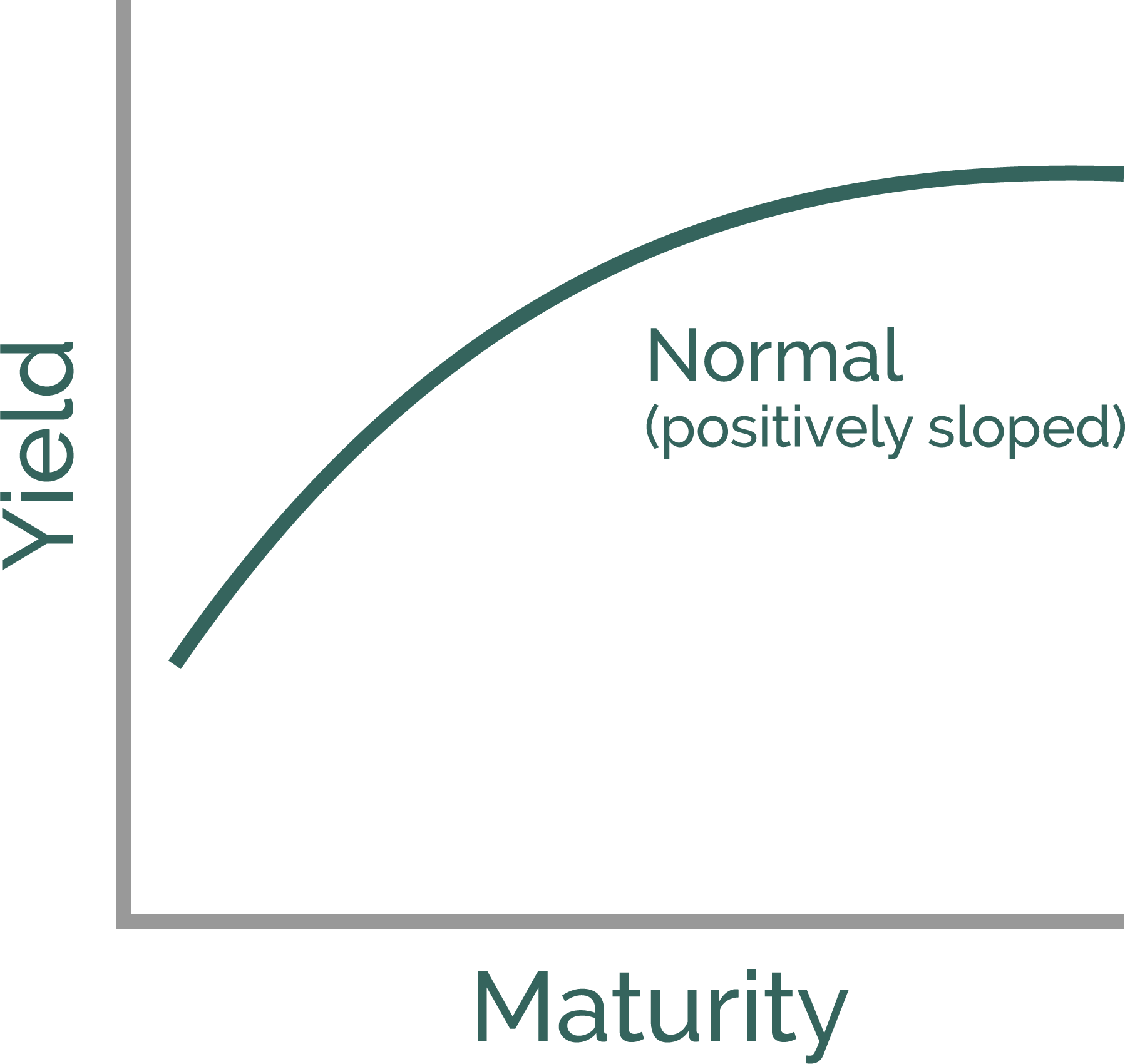 If investors become more concerned about future inflation, the difference between short-term and long-term rates will grow larger, a concept called the steepening of the yield curve. The yield curve steepens because investors will demand higher interest rates for longer term loans.  Conversely, as inflation expectations fall or worries about a recession occur, the yield curve will flatten. This steepening and flattening process is the market’s way of showing expectations about the future of the economy.
What is an Inverted Yield Curve?
An inverted yield curve occurs when long-term interest rates fall below short-term rates and typically looks like the opposite of a normal yield curve. See the drawing below. 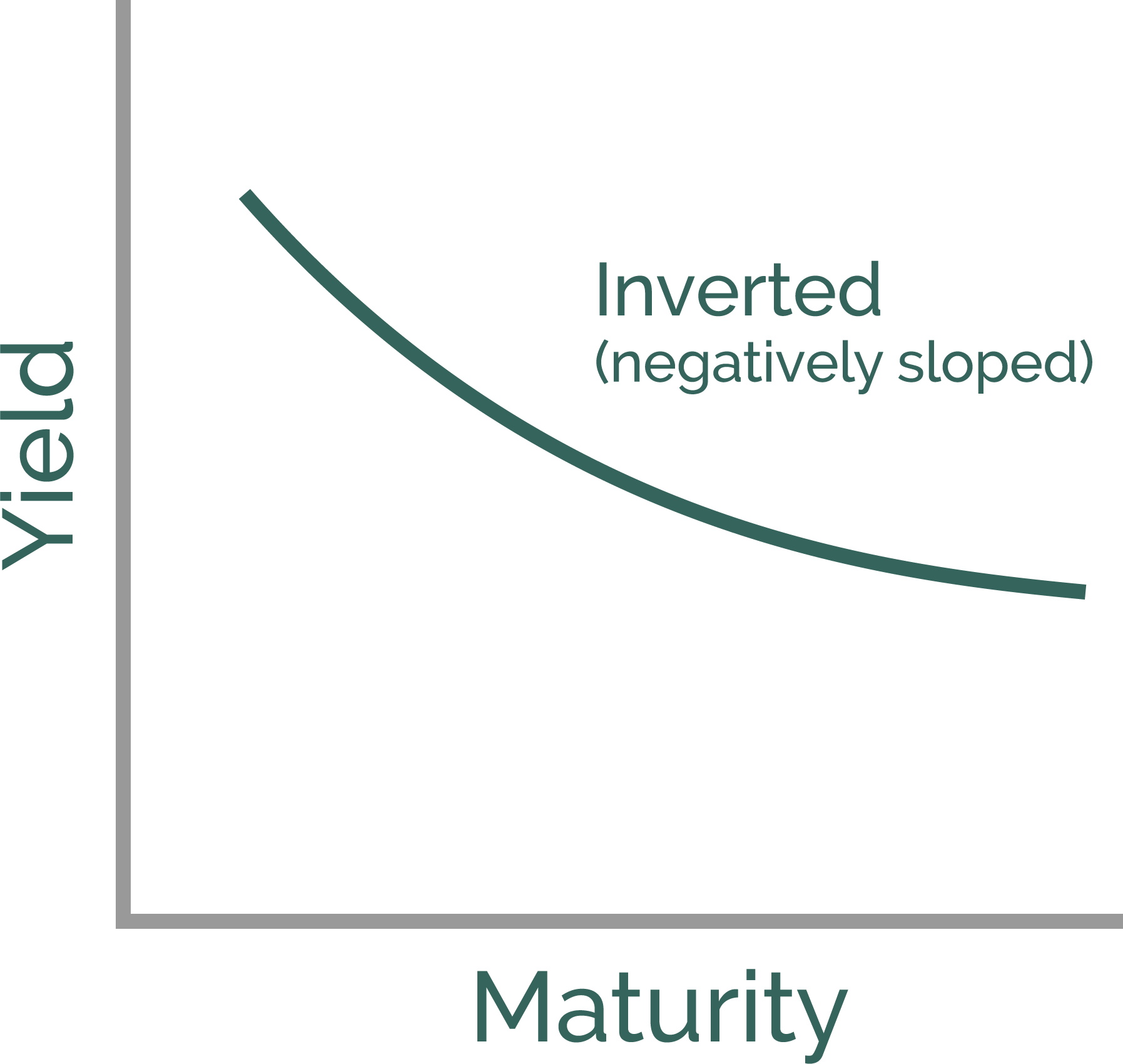 What Message Does an Inverted Yield Curve Send?
People often joke that bull markets don’t die of old age, but instead are killed by the Federal Reserve. In its role to prevent high inflation, the Federal Reserve will raise short-term rates when they think the economy is growing ‘too’ quickly. Fed Chairman Powell raised short term rates four times in 2018. This action typically causes the economy to slow down because interest rate hikes make borrowing more expensive for businesses and home buyers.

Unfortunately, the Fed often raises rates too fast or too much and not only slows the economy but tips it into a recession. When market participants think an economic slowdown will turn into a recession, they typically expect future inflation to fall. In this scenario, investors buy more long-term treasuries causing long term interest rates to fall. With short-term rates rising because of Federal Reserve actions and long-term rates falling because of investor buying... you get an inverted yield curve.

Why do investors buy long-term Treasury bonds when they fear a recession? They expect businesses to do poorly and consider US government debt the safest asset to own. They also expect the Fed to do an about face and reduce interest rates to re-stimulate the economy. Eventually this Fed stimulus leads back to a more normal yield curve, and we will have gone full circle.

Although the yield curve has inverted two separate times this year, many economists think the inversion should stick around for a couple months in order to give a clear recession signal. The May inversion has lasted almost three weeks... so stay tuned.

Nothing contained herein is intended to be a formal research report, or as a source of any specific investment recommendations and makes no implied or express recommendations concerning the manner in which any accounts should be handled.  Any opinions expressed in this material are only current opinions and while the information contained is believed to be reliable there is no representation that it is accurate or complete and it should not be relied upon as such. Investing involves risk, including loss of principal, and no assurance can be given that a specific investment objective will be achieved.