User Consent and Acknowledgement
By using this site for file transfer (the “Site”), you (“User”) acknowledge and agree to the following:
Thank you! Your submission has been received!
Oops! Something went wrong while submitting the form.
<< Return to 2xwealth.ingalls.net
Market INsightsQuarterly UpdatesFinancial PlanningIn The News
Quarterly Updates
FEATURED
Past Quarterly Letters >>
Easing and Excess
Fourth Quarter 2020

Now that the POTUS Twitter handle has changed hands, we no longer lose sleep worried how a late-night tweet will affect our portfolios. Unfortunately, our inability to get a good night’s sleep is now caused by other issues, namely:

U.S. debt to GDP is currently at 130% of nominal GDP, exceeding the previous peak after World War II. Deficits and hence total U.S. Government debt will continue to climb as the estimated recovery to pre-pandemic levels of output will likely take 2 years. 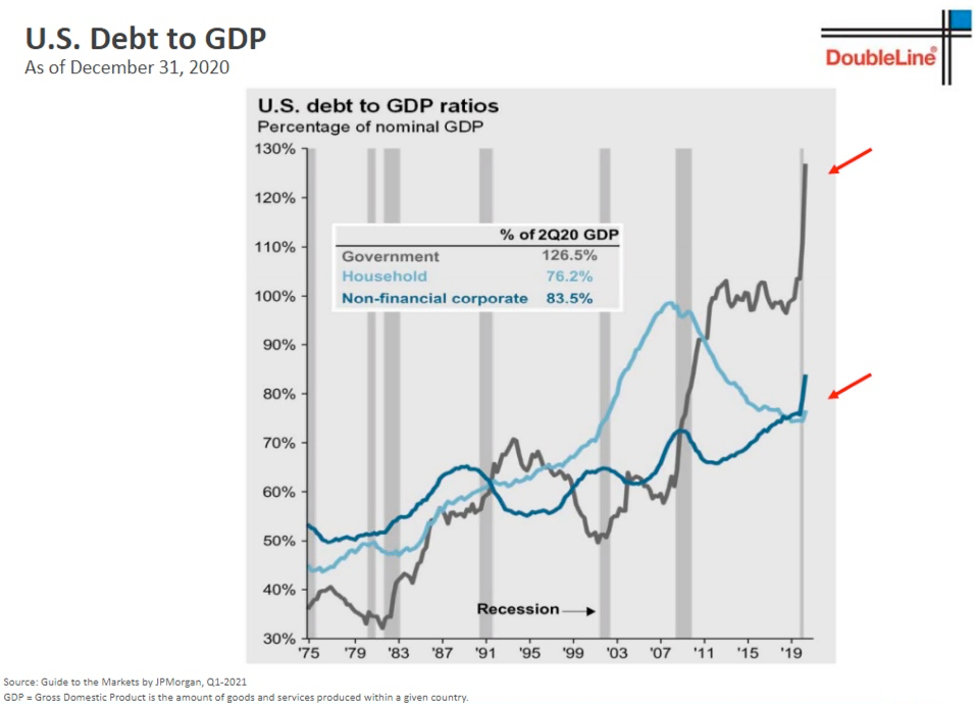 Who will buy our debt?

To finance our deficit, the U.S. Treasury sells bonds and bills through the financial markets. Historically, the Treasury has relied upon individuals and institutions both in the U.S. and overseas to buy our debt. Foreigners, including foreign governments, have bought our bonds to recycle excess dollars received -since the U.S. runs a huge trade deficit with the rest of the world.

Since 2014, foreigners have no longer been NET buyers of our debt for two principal reasons:

To take one current example, a 10-year Chinese government bond has a 3.15% yield, far above the 1.1% yield on the corresponding 10-year U.S. Treasury Bond. In addition, the Chinese economy is growing faster than in the U.S., and China has a large trade surplus with the U.S.

To attract foreign buyers, the Fed could allow rates to rise more quickly, but given the current level of government debt, higher rates would lead to even larger deficits. Just as importantly, higher rates on Treasury bonds would ripple through the financial markets and cause interest rates for all businesses and consumers to increase, further dampening economic activity at a time of high unemployment and business distress.

The Federal Reserve, as part of its program to keep interest rates at extremely low levels in the face of the pandemic, has chosen to step in and buy the debt itself. In 2020, Federal Reserve purchases were equal to100% of all net bonds issued by the Treasury. In effect, the Fed swaps cash for the bonds, thereby significantly increasing the money supply. Such an increase can have two significant effects:

The slack in the global economy (an excess supply of goods and services), originally caused by globalization and increased use of technology and then magnified by the pandemic, has meant inflation remains low for now despite the dramatic increase in money supply.

What would the Fed do if inflation began to rise, given its stated policy of keeping interest rates low? 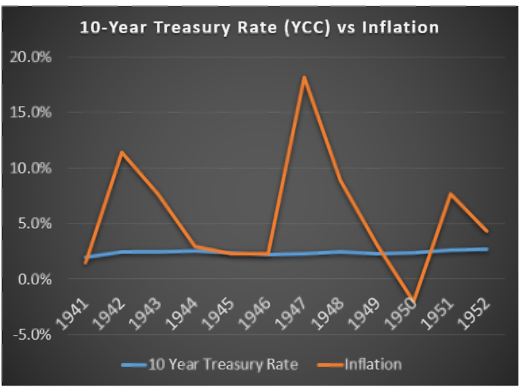 There is historical precedent for high government debt, high inflation, and low interest rates. In the 1940’s, the Federal Reserve acted to control interest rates, a concept known as yield curve control (YCC), and inflation skyrocketed. The chart below shows a consistent 2.5% 10-year bond yield (controlled by Fed bond purchases), while inflation fluctuated. This policy negatively affected the purchasing power of U.S. citizens.

To provide perspective, after WWII, broad liquidity measures rose 65% above trend compared to 22% today. So, while liquidity growth today stands out relative to the last few business cycles, it has not neared the extremes of the post WWII period.

Bitcoin has seen a significant rise in investor interest and its value relative to the U.S. dollar. We can point to a number of ways investors look at using Bitcoin:

Many have predicted (and we would agree) in the next decade, there will be a redesign of world currency systems. Although we think the new money will likely be a digital bearer system, we don’t think Bitcoin will be the ultimate answer.

“The history of financial markets is the history of bubbles,” said James Angel, Georgetown University finance professor. He notes that authorities could move to crimp the bitcoin rally if they start to get worried that it’s becoming a threat. “Almost everybody who tries to start their own money does so in competition with a national currency, and it usually gets shoved aside by regulators.” 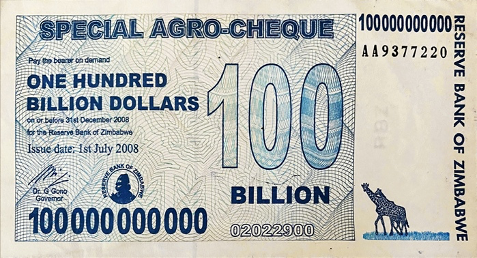 With all the money that the Federal Reserve is putting into the system, there are bound to be excesses. While many are concerned about bubbles in the stock market, the bond market also has risks and is unlikely to protect against equity sell offs the way it has in the past. Jeff Gundlach published the following chart: 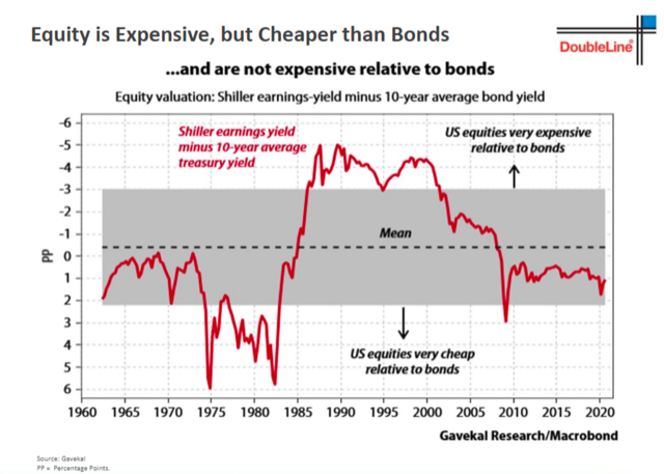 We think bonds will provide less of a buffer in the future given 1% yields and the Fed’s stated commitment to inflation.

In June of 2020, we believed it made sense to consider the following:

As we look to 2021, our views remain the same, but with an increased emphasis on equities outside the U.S., particularly emerging markets. 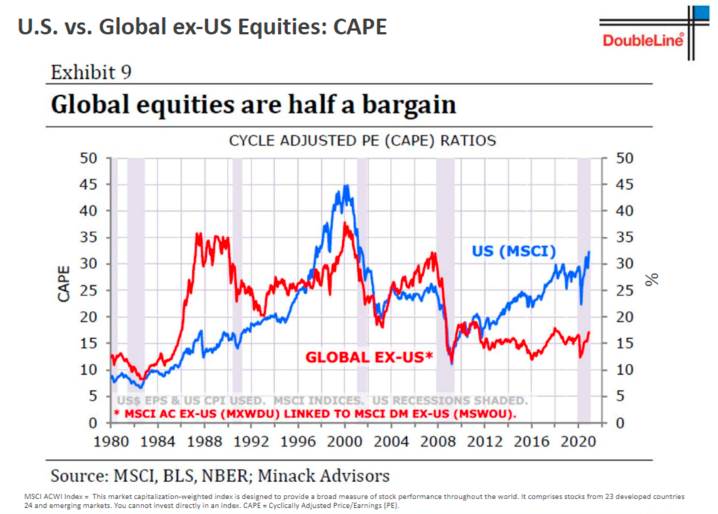 Hopefully you haven’t survived the challenges of the pandemic only to be done in by our dense missive.

We remain focused on the long term, guiding your portfolio to meet your goals with an eye on approaching inclement weather. Please call us with any questions, we are here to help.

Previous Quarters
‍Click on the link below to download

The material included herein is confidential and for the sole use of the recipient. It is not to be reproduced or distributed to others without the Firm’s express written consent. This material is being provided for informational purposes, and is not intended to be a formal research report, a general guide to investing, or as a source of any specific investment recommendations and makes no implied or express recommendations concerning the manner in which any accounts should be handled. Any opinions expressed in this material are only current opinions and while the information contained is believed to be reliable there is no representation that it is accurate or complete and it should not be relied upon as such.  Investing involves risk, including loss of principal, and no assurance can be given that a specific investment objective will be achieved.

The Firm accepts no liability for loss arising from the use of this material. However, Federal and state securities laws impose liabilities under certain circumstances on persons who act in good faith and nothing herein shall constitute a waiver or other limitation of any rights that an investor may have under Federal or state securities laws
‍
2X Wealth Group is a team at Ingalls & Snyder, LLC.,1325 Avenue of the Americas, New York, NY 10019-6066. (212) 269-7757